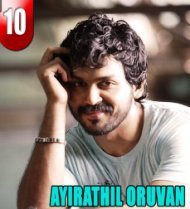 Dream Valley Corporation’s Aayirathil Oruvan, starring Karthi, Reema Sen, Andrea and Parthiban and directed by Selvaraghavan that has been in the making for nearly two years, is getting ready for release. The film’s story is kept under wraps and so and there is a lot of excitement surrounding the release. Parthiban is said to have played a historic war hero’s role. G.V. Prakash’s music is one of the chief highlights of the film. There are nearly ten songs and instrumental mixes in the album.