Akshay: Sharing space with Sylvester is memorable one 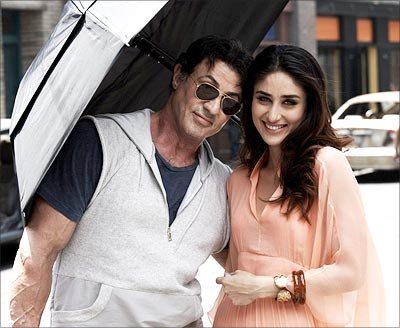 Akshay feels that the presence of Hollywood biggies in the film is not a publicity stunt but the need of the script. It was a meeting of equals, when action hero Akshay Kumar shared screen space with Hollywood muscle man Sylvester Stallone in the upcoming movie ‘Kambakkht Ishq’.

Akshay told that Sharing space with Hollywood action star Sylvester Stallone in the film was the most memorable experience.

Akshay said that he told me about his knee problems and how he overcame his fear with heights to act in the movie ‘Cliffhanger’, Akshay, who plays a stuntman in the movie that stars the likes of Stallone, Denise Richards, Brandon Routh and Holly Valance in important cameos. He said that the presence of these actors is essential. They are needed to take my character forward in the film.

Recounting his near fatal encounter while shooting for his film Blue the actor said ,I performed stunt sequences 150-feet under sea to fight with 40 sharks. I hit an iron rod and started bleeding in the head. But, I was taken up on the ship within 20 seconds and provided treatment.

Entertainment News, NewsAkshay: Sharing space with Sylvester is memorable one