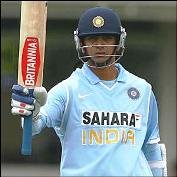 Chairman Krishnamachari Srikkanth’s said that this is the best team we could have sent.

Seletors said that Our batting looked suspect during the T20 World Cup and the West Indies series. So we thought Dravid was the right man to add some spunk to the lineup, especially on the fast and bouncy tracks of South Africa.

With Zaheer (Khan) and (Virender) Sehwag not there, we’re short of two genuine matchwinners. Basically, we were looking at more impact players the selector added.

Abhishek Nayar is the only all-rounder in the squad while wicketkeeper Dinesh Karthik will be considered as the third opener in case of a crisis. He did the job successfully in the West Indies and is a multi-utility cricketer.

Dravid would once again take guard for India in ODIs. It was middle-order solidity the selectors were looking for and Dravid fitted the bill perfectly.