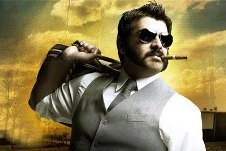 Ajith starrer Asal is being shaped up in a brisk way. And it is guaranteed that ‘Asal’ will be a great feast to Ajith fans!

After Small section of Ajith fans announced inauguration of their fans’ association, Aasal Thiruvizha. Responding to this news, the Fans’ club association president Suresh Chandra released a press note saying the event is not official and is being conducted without the permission and acceptance of Ajith. He also claimed that the motive is to split the members of the fan club and elect a new leader.

Now we hear that Prabhu is worried about the developments in Ajith’s fan clubs at the time of Aasal release. Now actor says he would come with a compromise solution to please all his fans.

Now Ajith starrer Aasal is in the final stage and producer Prabhu is busy with its audio launch function.