Nayantara-Prabhu Deva once again together to watch Wanted 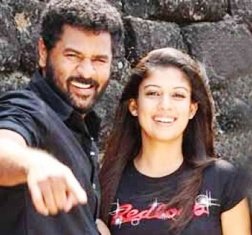 Nayantara-Prabhu Deva once again together. The reigning actress watched the first day first show of Prabhu Deva’s debut directorial venture Wanted along with the director at the Cinemax multiplex in Bandra.
Nayantara drove to the multiplex straight from the airport to catch the show. Prabhu Deva and producer Boney Kapoor could have easily arranged a special screening for her in one of the preview theatres but Nayantara was very particular about watching the film. The Nayantara said that she really enjoyed the movie, especially the punch dialogues and Prakashraj’s performance as the villain. After watching the film she told that the film was going to be a super hit and congratulated him.
However, Nayantara insisted on taking the evening flight as she had an early morning shoot on Saturday and Prabhu dropped her at the airport.