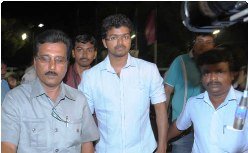 The Mirchi Music Awards South 2009 album of the year was Ayan and the best female vocalist award went to Jankai Iyer for Azhagaai Pookkuthey from Ninaithale Inikkum. The award for best lyricist and best music composer went to Na Muthukumar and Yuvan Shankar Raja respectively for Oru Kal from Siva Manasula Sakthi. The best male vocalist award was bagged by Madhu Balakrishnan for his soulful rendition of Pichai Paathiram from Naan Kadavul.