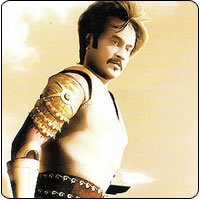 Kollywood first 3D animation film, which is being directed and produced by Soundarya Rajinikanth, may hit the silver screens in June 2010. The film has an animated version of Super star Rajinikanth in the lead role, which will also be voiced by him.

Here comes the surprise, everyone thought that Sultan – the Warrior will have only an animated version of the Superstar, the latest buzz is that Superstar Rajinikanth will appear in the film for about 20 minutes. Still there is much suspense to thrill the fans but it will be revealed on the big screen.