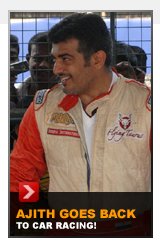 Actor Ajith Kumar is a professional car racer. He has driven in circuits around India and abroad for various races, including Formula Asia BMW Championships in 2003.

As he felt that this passion for car racing negatively affected his cine career, he stopped participating in car races. Now the latest news we hear is that he is all set to participate in the Formula 2 race beginning in April 2010 in Europe. Now the Formula 2 participation has given rise to much speculation on the date of this film’s launch.

This Formula 2 will go on till October. There are also reports that his next film is tentatively titled Kaaval, directed by the stylish film-maker Gautham Menon.