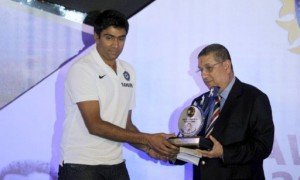 The Polly Umrigar Award is awarded to Dravid in recognition of the 1,285 runs with six centuries he made from 15 Tests between October 2010 and September 2011, Rahul Dravid Saturday attributed his performance to hard work. Dravid, who was not present at the awards function here when his parents received the trophy, said in a video message: I think a lot of my good performance is down to the hard work I put in. I think it has all paid off this year.

Subramaniam Badrinath got Madhavrao Scindia Award (TNCA, Highest run-getter in Ranji Trophy 2010-11) – 922 runs at a rate of 131.71 in nine matches, inclusive of four centuries and three half centuries) .

Bhargav Bhatt got Madhavrao Scindia Award. (Baroda CA, Highest wicket-taker in the Ranji Trophy 2010-11) – 47 wickets at an average of 21.57 in nine matches, inclusive of four 5WI and one 10WM.