IS Thuppaki Tamil Movie is Hit or Flop? 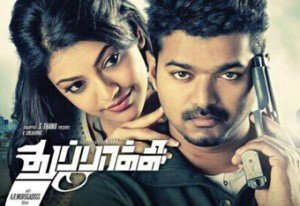 Vijay carried the film on his capable shoulders. He enters the arena as a fit, well-muscled army-man, and certainly relishes the action sequences.

Vijay renounces his usual punch-dialogues, dances with zeal and excels. Vidyut Jamwal looks fantastic, and his casual ruggedness fits in very well for most of the movie.

Movie starts with a cat-and-mouse game as Jagdish, swift to identify terrorist sleeper cells devises a plan with his staunch but bumbling SI -Sathyan and his army friends, to outwit the kingpin Vidyut Jamal, who seems to possess wit enough to challenge the superior intelligence of Jagdish.

Apart from the movie the movies had some unneeded character, Sathyan’s comic role falls remarkably flat and Jayaram is utterly wasted.

Song sequence will leave the movie dull. Without the song the movie will be a super one. Harris Jeyaraj hasn’t performed to his potential.