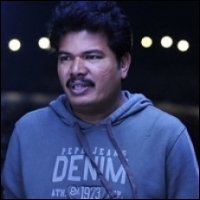 Director Shankar took it to the social networking sites to disclose details about his upcoming magnum opus ‘I’, starring Vikram.

The ace director Shankar took it to the social networking sites has washed off these speculations and disclosed that it is a romantic thriller movie names as ‘I’.

Music will be scored Under A.R.Rahman’s baton, written by Kabilan, a song was recorded recently.