Vidya Balan as the best actress For Dirty Picture 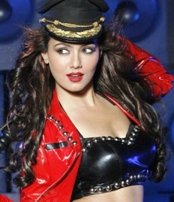 Vidya Balan got the best actress and the actress’s performance in The Dirty Picture has won her accolades from all quarters as she excelled in her role in the film. The National Media Network has selected Vidya Balan as the best actress. These awards will be distributed at the function on January 21st.

This has fetched the actress the award for best acting. Further, the film The Dirty Picture has also been adjudged as the best film.