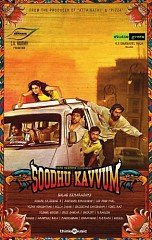 Soodhu Kavvum movie directed by another young director – Nalan Kumarasamy. Soodhu Kavvum tells the story of petty criminals. Movie starts with outlining the perfect crime and executing it is only half the story as Soodhu Kavvum offers some radical and sometimes outrageous twists and turns.

Nalan Kumarasamy shows his gratitude in the opening slide by thanking the judges of the show naalaya theerpu – Prathap Pothen and Madhan.

Overall Soodhu Kavvum movie is the movie to watch this summer