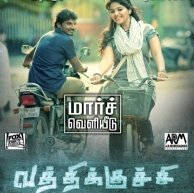 Vathikuchi Movie is second Production venture of A.R.Murugadoss Productions and Fox Star Studios. Vathikuchi movie has debutante Dileepan and Anjali along with character actors like Sampath and Jayaprakash.

Debutante Kinslin directs Vathikuchi movie. The music of Vathikuchi by Ghibran has already been declared a hit. The success of songs like Kanna Kanna and Kuru Kuru already made hype of thhis movie

Vathikuchi movie would be released in this March 15th. Hope this movie also will be hit and have something new to Tamil cinema.