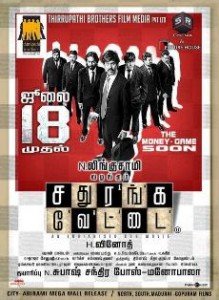 The comedy heist film Sathuranga Vettai has been directed by debutant H. Vinoth. The film has Ishara Nair, Ponvannan and Ilavarasu among others. Movie Sathuranga Vettai is produced by Manobala and Sanjay Rawal, and the film is distributed by Thirrupathi Brothers, who are riding high on hat-trick hits post the success of Golisoda and Manjapai.

Sathuranga Vettai had enjoyed positive pre-release buzz and has also received some encouraging reviews from critics. It remains to be seen if the film will impress the audience.