Former India captain Sourav Ganguly said Mahendra Singh Dhoni’s boys were capable of shrugging off their World Twenty20 disappointment and would bounce back in the one-day International series against the West Indies, which kicks off on Friday. 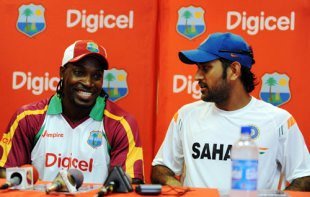 “Sachin (Tendulkar), (Virender) Sehwag and Zaheer (Khan) will surely be missed… But I’m confident that the rest are quite capable of putting up a good performance against the West Indies as they are experienced in the ODIs. He though, had a word of caution for the Indian team. West Indies are a good team. They have some quality players in Chris Gayle, Ramnaresh Sarwan, Dwayne Bravo and Shivnarine Chanderpaul who can change the outcome of a game. It’s going to be a tough series.

Sourav downplayed India’s not-too-impressive performance in the World Twenty20 saying that Team India had consistently done well in the shortest format of the game.They have been doing well for the last one and a half years and failure in just one tournament shouldn’t be blown up like this.

Sourav, who recently began his innings as a commentator, put his weight behind skipper Dhoni. He has been handling the job quite well. You can’t judge him by one tournament.