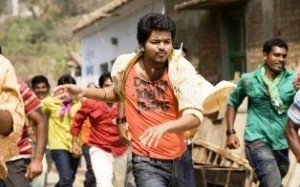 Ilayathalapathy Actor Vijay recently completed Vettaikaran. This movie has music by rock composer Vijay Antony. Cinematography is by Gopinath and editing is by V.T. Vijayan. Vijay who finished his entire shooting with a song sequence in Pune and even got a ‘U/A’ certificate last week. Now Sun Pictures asked the Vettaikaran crew to reshoot some the scenes. Vijay who is busy in shooting for his 50th film Sura, being directed by S.P. Rajkumar and produced by Sangili Murugan has not taken any decision on re shooting Vettaikaran

After the disappointing run of his recent films Kuruvi and Villu, Vijay has pinned his hopes on Vettaikkaran, based on the story of an energetic young man and his angst against baddies in society as his recent movies Kuruvi and Villu didn’t get much response from audience.

Sources revealed that the Sun Pictures, watched the film and expressed their views, reportedly insisting that director Babu Sivan needs to reshoot some scenes which they found less than satisfactory.