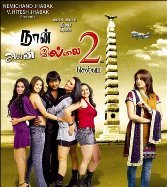 Naan Avan illai 2 is a forthcoming Tamil film directed by Selva. It is a sequel to the 2007 Tamil film Naan Avan illai. Jeevan will reprise the lead role, while the female roles will be enacted by Sangeetha, Lakshmi Rai, Shweta Menon and Hema Malini, who starred in the film Indira Vizha. D. Imman, who did the background score for the first part of the film, will replace Vijay Antony as the music director. The film is currently in its production stage and slated for a 2009 release.