Endhiran Songs to be release on Early April: Latest News

Endhiran which has Superstar Rajinikanth as a hero and Aishwarya Rai as heroine after a long gap in Tamil paired opposite our superstar. Endhiran is directed by Shankar after their blockbuster Sivaji, the boss. The stylish director has also roped in Oscar winner Resul Pookutty for sound effects; it is also said that a unique sound effect has been created for the film.
As the story of Endhiran is set in the future, when new and bizarre fashion fads would come into existence. And that is the reason Rajinikanth walks the sets of Endhiran in costumes that are quite hard to initially appreciate, but look absolutely great on him. 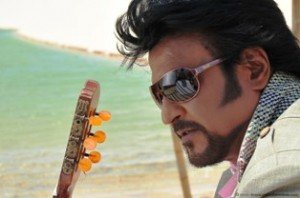 Endhiran is also is special for its choreography by Prabhu Deva. Lyrics by Vairamuthu, art direction by Sabu Cyril and cinematography by Ratnavelu comprise a regular Shankar team.

Here comes the Good news for all Rahman fans and rajini fans. Latest News of Endhiran is that reports suggest that the audio of the much awaited Endhiran will be released in April. A R Rahman – The Mozart of Madras has in fact finished composing the theme music and the rest is in progress.