After a great struggle the movie has finally released. The movie has taken more than 2 years of production. 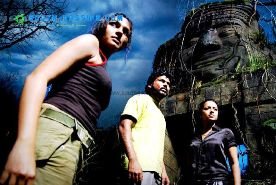 The story was the expenditure of Missing Andrea’s father (Prathap pothan) and Missing pandian statues, which is consider as the assistors god. As they are on the way to expenditure they have to cross 7 traps like serpants, sea, kaattuvasis, etc which they need to cross to go to that place. The teams were well aware of the problems and risks about the place they are travelling.

The movie starts with Andrea and reema along with archeological team is planning to go to island near vietnam in search of missing prathap archeologist. Here comes our hero. Karthi’s introduction was damn cool. Reema sen was damn hot throughout the movie. The movie started with Andrea working as archeologist and karthi as low wage worker(normal worker). Andrea’s father(Prathap pothan) went in research of chozha place found to be missing.

The first half is superb. In second half the king sholan(partiban) took the credits. He acted superbly along with reema sen. SelvaRaghavan has taken the movie to the next level even he took Tamil cinema to next level. R.parthiban’s, karthi, andrea and reema acting are very good. In second half we can get a Hollywood effect of movie. This movie has all sorts of ingredients to the audience especially for youth. Hope this work will give him a great success in coming film. I would rate this movie as 3.25 out of 5 because of costume designs and location.