Ajith Kumar(thala) got a Standing applause from Super star RajiniKanth for his Speech In CM kalanigar Karunanidhi Fuction and the audience in the gallery were Stunned.

Kalaignar also appreciates Ajith’s speech. Amitabh Bachchan, who later got his turn, appreciated our ‘Thala’ for making a great speech. 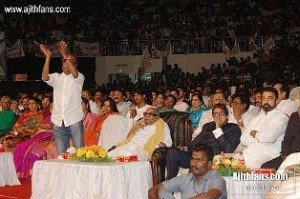 It is Very often most of our actors are threatened by few personalities in film industry to get connected with political issues. Now and then, lots of protests are held by the members in union. I request everyone to let the actors get on with their profession and save them for the best. He however said that he attended the function on his own to thank the Chief Minister for his service to Tamils and Tamil Nadu for the past six decades and no one pressurised him to do so.These were honest words humbly presented to the CM.

Rajinikanth stood up and gave Ajith a standing ovation, which resulted in the entire stadium applauding in uproar.
When our CM went behind the microphone, agreed that cine folk should not be forced to make statements or participate in events related to social causes.