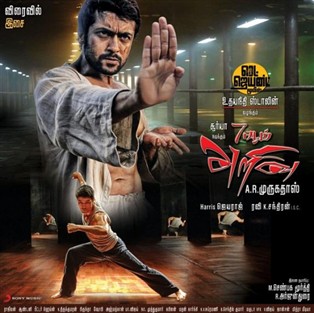 At Chennai Trade Centre Nandambakkam witnessed a galaxy of stars yesterday in the eve of the audio launch of the movie. Kollywood stars like Dhanush, Karthi, Vishal, Jeeva and Jayam Ravi are graced the audio release function.
This was telecast in live by the sun network. Director KS Ravikumar, actor Dhanush and Harris Jayaraj unveiled the music of the album.

The music launch event also showcased some hair-raising acrobatic stunts from experts, who were flown down from overseas. Jai and Anjali took the show forward and their anchoring was much appreciated.

‘7am Arivu’ is a science fiction thriller written and directed by A R Murugadoss, who earlier directed the sensational hit ‘Ghajini’ with Surya. The film is said to be made on a whopping Rs 84 cores.This film (both Telugu and Tamil versions) is slated for release on 26 October 2011 for Diwali.
‘7am Arivu’ is dubbed into Telugu as ‘Seventh Sense’. Audio of the Telugu version will be launched tomorrow in Hyderabad. Music is composed by Harris Jairaj.Track List
Entertainment News7am Arivu 2011 tamil mp3 movie song review- hit or flop