SRK and Rajini together in RA ONE 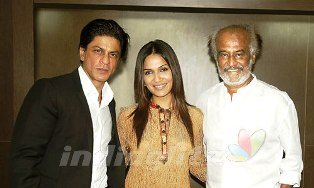 Shah Rukh Khan said that he is hugely indebted to Rajinikanth and his family and he will be visiting them on Sunday at their home in Poes Garden. He revealed that he had tears in his eyes when Rajini did a special appearance for Ra One.

The Bollywood superstar said that he is in awe of Rajini and is honored to have shared screen space with him. The superstar looks all hale, healthy and glee with his daughter dearest and SRK.

Fans will soon get to see him this Diwali in his cameo in ‘Ra.One’, he will be seen in his Chitti avatar. Fans can see SRK and Rajini together in RA ONE movie

Entertainment News, NewsSRK and Rajini together in RA ONE