Dum Maaro Dum movie is set to release on April 22 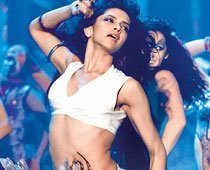 The forthcoming film Dum Maaro Dum is going to be released after great struggle.

The promos of the movie, which ran into controversy after a media professional. The film, starring Abhishek Bachchan, Bipasha Basu and Prateik, also evoked strong reaction from women’s organisations here.

Fox Star Studios India Private Limited (FSSIPL), which is the distributor for the movie, told that the film is set to release on April 22. There is nothing in the movie that spells disrespect for the Goans. Duttani admitted that the objectionable part has been deleted from the film.

The promos always change whenever movie is nearing its release. The film is a fictitious story about a drug mafia in Goa and its links with various foreign elements. The story is essentially about how a minister in Goa directs an honest police officer to eradicate the drug mafia.