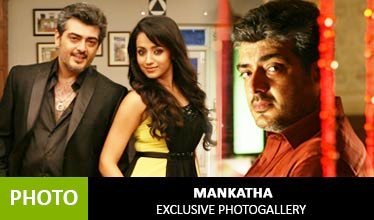 Ajith Mankatha movie is a Mega blockbuster Hit movie. The film is a racy one with many twists and it will keep one glued to the screen till the very end of the film, not even sparing the end credits. Ajith’s new avatar as a villain, the various twists in the film boasts off a criminal Ajith one would have never seen.

Mangatha real mass movie. Yuvan music and background is excellent. Very less dialogues Ajit speaks, fully style and background music is awesome. A treat to Ajit fans. It is a benchmark film I would say for actors turning into negative roles.

Mankatha is an Ajith movie all the way. Venkat Prabhu has been a worthy director to Ajith and given the actor a strong and interesting movie. Arjun lives up to his Action King tag. He adds variety on screen and is cool and consummate as a police officer

Songs are not a value addition to the film at all and are mostly road blocks sans ‘Machi open the bottle’. Ajith completes his mission of breaking all the syntax of a Tamil.

The cat and the mouse game is exciting and the best part is you are never able to realize how many cats and mice are involved in the game. You cannot be quite sure of who is playing the double cross on whom and it is not until the final frame that you can put all the pieces together.

Ajith’s characterization is a major plus for the film. Cheers to Ajith. The man after a long gap gets a role where he can perform with variety. He is at his best and his salt and pepper look is catchy and attractive.