Shankar Praise Vijay – After Rajini, it is Vijay for Punctuality 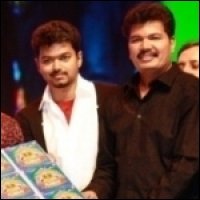 Vijay thanked director Shankar for giving him the opportunity to star in Nanban. Vijay added that he made several true friends during the making of Nanban and attributed this to the film’s title. The star was indicating that Jiiva, Srikanth, and others are his good friends and is happy to be associated with them.

Praising Vijay, Shankar said that he is one actor after Rajinikanth to be present on the sets punctually. Shankar revealed that SJ Suryah lapped up the role in Nanban, something which he did not do even for Endhiran. That is how meaty his role is in Nanban, added Shankar.

He was then honored with an enormous garland and a crown.