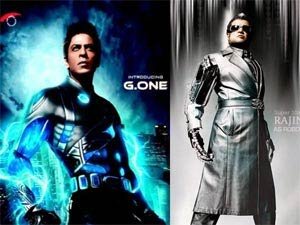 The Tamil actor Superstar Rajinikanth has reportedly agreed to do a guest appearance in the forthcoming Bollywood film Shahrukh Khan’s sci-fi Ra.One.

Shahrukh Khan was thinking to have a look alike of Rajinikanth but changed his mind to rope in the superstar himself for the scene. Sources say that Shahrukh Khan wanted Rajinikanth to be part of the film and that is the reason why the King of Bollywood recently said that Ra.One will pay tribute to the superstar’s Endhiran. The Endhiran actor will be reportedly seen in a scene, where the Bollywood actor is under threat from deadly gangsters. Rajini enters in a car and delivers the punching dialogue.

Rajinikanth’s portion will be shot at Ramoji Film City in Hyderabad on October 3. It is said that the Tamil superstar will deliver the dialogue – Naan oru thadava sonna, nooru thadava sonna madhiri from his blockbuster movie Baasha.