Why this Kolaveri Di song gets world recognized 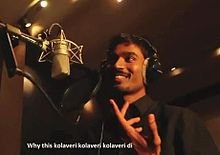 Kolaveri Di song gets world recognized. Buzz around the world and internet why this Kolaveri Di. Every one almost most the young people memorize the song so easily and love to hear and sing the songs. Joining the long list of celebrities that have praised the Why This Kolaveri Di song is the Oscar winner AR Rahman. Amitabh Bachchan, Abhishek Bachchan, Rajinikanth, Kamal Haasan, Trisha, Kushboo, Shriya, and others have also lauded the song for bringing in the mass appeal.
He has said that the song in 3 has become one of the hits of the year and is happy for Dhanush and team for making it a huge success.

kolaveri topped the Indian trends in Twitter on the evening of 21 November 2011. Within a week of the official release of the video, it received more than 1.3 million views on YouTube, more than 1 million shares on Facebook.

The music video features the actor-playback singer Dhanush singing the song in a studio, accompanied by composer Anirudh on a keyboard. Co-star Shruti Haasan and director Aishwarya Rajinikanth are seen listening in the background. The popularity of the song was also reported by international media like BBC and Time magazine.