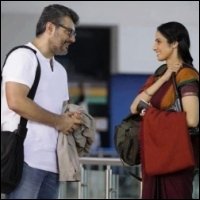 Ajith’s cameo is highly enjoyable and he gets to mouth lines which are relevant and significant. It’s an impact full three minutes. The talk and anticipation on Ajith’s cameo in English Vinglish and the actor did not let down his fans.

In fact his performance goes beyond pleasing just his fan base and gives our entire nation a shot in the arm with his quips at the New York immigration officer.

As he says, it is good to learn a language but not knowing is not bad.

Ajith looks his cool and charming best. His character is beautifully reassuring as he boosts the morale of a first-time flyer, Sridevi.