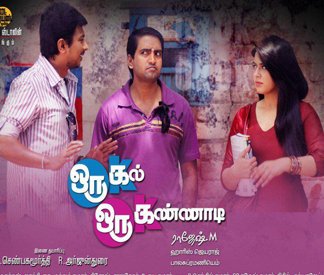 OK OK ( Oru Kal Oru Kannadi )is a comedy-cum-romantic entertainer that has Hansika pairing up with Udyanidhi. The Actor Santhanam plays an important role in this film. The debut of Udayanidhi Stalin as hero who is also producing the film under his Red Giant Movies banner.

Rajesh Who had given a best comedy-cum-romantic film like SMS and Boss Engira Bhaskaran is directing this film Oru Kal Oru Kannadi.

Harris Jayaraj has scored the music for the film. The music rights of Oru Kal Oru Kannadi (OK OK) had gone to Sony Music. There are six songs in this album and Harris is said to have recorded these songs in Singapore. This movie is going to a cracker for Comedy lovers. The trailer had proved what the movies is supposed to do.