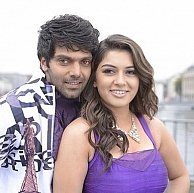 Settai movie is about three roomies who get embroiled in an almost in bad situation. With Santhanam, every scene has a  clear indication of what to expect and when he has been accompanied by Arya and Premji, the anticipation levels are high. But more of the scene the comedy is not that much worth.

Hansika delivers quite well and suits her role.

Now the news is that, The makers of Settai have decided to leave out the hit song, Agaladhey Agaladhey from the movie. As this song comes just before the climax, which make the story slow, at a time when the interest levels are high.