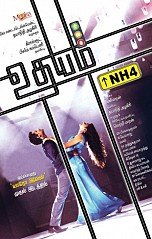 Udhayam NH4 Movie is directed by Manimaran. The Screenplay and story is done by the national award winning director Vetrimaaran. The music for this film is done by GV Prakash.

The film has Siddarth and Ashrita Shetty along with Kay Kay Menon, Kishore and many more. Already the song Ora Kannala… sung by Gana Bala had became huge popular among the youth.