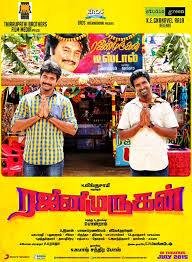 Rajini Murugan or Rajinimurugan tamil movie is a romantic comedy film directed by Ponram, who earlier done the mass hit movie Varuthapadatha Valibar Sangam. The film starts with Sivakarthikeyan, Keerthi Suresh in the lead roles.
Actor Soori and Rajkiran play supporting roles. Rajini Murugan first was revealed on Vijay Awards function. The movie audio was released on June 7th.
The film produced by Thirupathi Brothers. This movie has music by D. Imman and cinematography by Balasubramanien. The movie is said to be release on july 31st. Another treat from Sivakarthikeyan and soori combination.