No tsunami in Chennai and India after earthquake struck Indonesia 2012 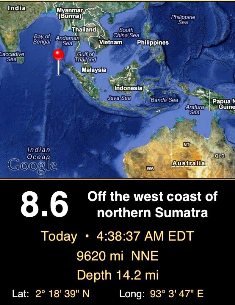 Many of the compaines, educational institutions and shops were closed as the cities like Kolkata and Chennai experienced a second aftershock at around 4.25 pm.

It spurred warnings of a possible tsunami. A little over two hours after the first earthquake, with no big waves reported and just as it seemed that the tsunami alerts would be lifted soon.

National Disaster Management Authority Vice President Sashidhar Reddy told that there is no specific threat. There is no likelihood of any tsunami in the Indian Ocean region.

A tsunami warning for the Nicobar Islands that was downgraded to an alert too has been withdrawn.

India has finally withdrawn the tsunami warning that was generated earlier.

NewsNo tsunami in Chennai and India after earthquake struck Indonesia 2012, no tunami in chennai 2012