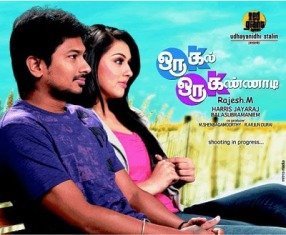 This film OKOK has a debut of Udayanidhi Stalin as hero who is also producing the film under his Red Giant Movies banner. Rajesh Who had given a best comedy-cum-romantic film like SMS and Boss Engira Bhaskaran is directing this film OKOK – Oru Kal Oru Kannadi. Harris Jayaraj has scored the music for the film. The music rights of Oru Kal Oru Kannadi (OK OK) had gone to Sony Music

The film will be a joyride the songs too. Here come five songs, and the highlight of the album will be the “Venaam Macha” song